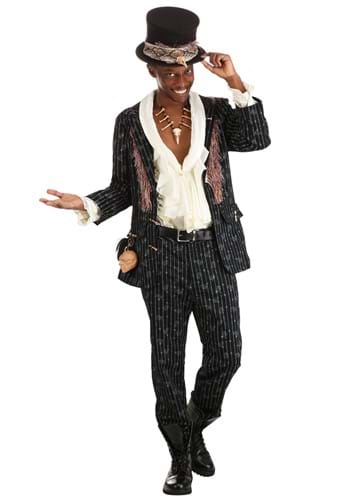 Hello, hello, lost soul. Oh, don't look so scared. You've clearly come to the witch doctor because you have a dream you're desperate to achieve or a wish you don't dare speak anywhere else. What is it? An unfaithful lover, a promotion just out of reach, an insatiable desire for wealth and fame? Tell the good doctor all about it and he can help. It'll just take a smidgen of black magic and a tiny bit of help from some of the other side's more mischievous spirits, and the spell is cast. But wait, we haven't talked about payment yet. You've got what you wanted, but the witch doctor has put his spell on you too. You're in his power - but he's so charismatic, you won't mind at all.

Bewitch everyone who sees you in this exclusively designed Witch Doctor Costume for Men! The whole ensemble just drips charisma and a little bit of danger - perfect for anyone looking for a truly unforgettable outfit. The top consists of a jacket and sewn-in satin shirt with a deep V neck fringed in aristocratic ruffles. The jacket also has fringe around its lapels and a chilling all-over skull pattern that matches the included pants. An eye-catching shrunken head is sewn to the jacket (an enemy? A talisman? Who's to say?) and goes perfectly with the macabre bone necklace. Slip on the top hat for some dark razzle dazzle.

You'll be spellbinding in this uniquely spooky costume! Your friends will be convinced that you made a deal with the other side to get an outfit this awesome, but what they don't know won't hurt them.