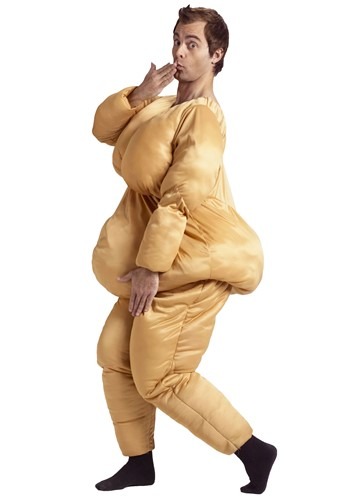 Time to Beef Up

You know what they say, bigger is always better but sometimes you can afford to go out on Taco Tuesdays. Not everyone is able to toss back double ½lb cheeseburgers like sliders. Sadly, some people just don’t have the stomach for it but we’ve finally come up with a quick and easy solution to pack on the mass! All you need to do is toss on this Adult Fat Suit Costume and you’ll be large and in charge.

No longer waste time going back and forth at the buffet trying to become the biggest stud in town. Grab this fat suit and you’ll be a total beefcake. Go out this Halloween au-natural and strut around in only your new blubbery bodysuit. Of course, if you don’t want to make anyone jealous of your new bod, you can also make this bodysuit an addition to another costume. You could dress up as the larger-than-life version of celebrities like Jason Momoa or be a version of the Flash that’s lost his crazy fast metabolism. You could also be a number of Chris Farley characters and bring this late, great comedian to life again! With this fat suit, the world is your oyster… just make sure you don’t toss it down your gullet…

This hefty jumpsuit was designed to have a fleshy color. There is also plenty of padding stuffed inside it to give it’s user a puffed up appearance.

Gaining Weight has Never Been so Easy!

Don’t worry about packing on the mass for your overweight Halloween costume idea. Not only is it not the healthiest thing to do, it’s also quite ridiculous when we just happen to have these Adult Fat Suit Costumes available! Put down the sandwich and grab your very own fat suit today, save yourself from the stress of trying to become the biggest with a few simple clicks.