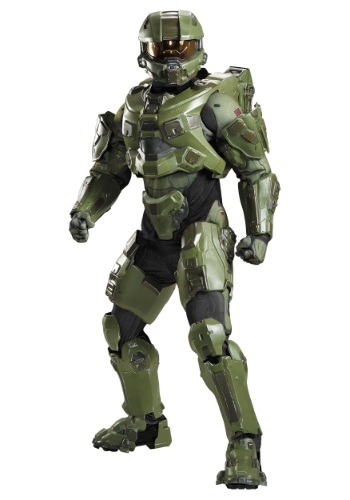 Thought I'd try shooting my way out. Mix things up a little.

Master Chief Petty Officer John-117, or just Master Chief as he’s better known, is the hero of Bungie’s beloved Halo series. Born on the colony world of Eridanus II in 2511 AD, at the tender age of six he was identified as the ideal candidate for the SPARTAN-II Program. Master Chief was secreted away to Reach to receive special training and surgical augmentation to turn him into the ultimate killing machine. At age fourteen Chief had the body of an Olympian athlete, nearly unbreakable bones, super strength and reflexes, and heightened eyesight. The program was a success -- Chief was a beast.

Of course, anyone who’s played the Halo series knows firsthand what kind of wholesale mayhem Master Chief is capable of accomplishing, but they also know he doesn’t do it naked. Master Chief’s 1,000 pound Mark VI Mjolnir Armor interfaces directly with his brain, letting him control his actions with thought before he has to move even one beefy muscle. Despite its great weight, the Mark VI makes Master Chief move faster and jump higher than he ever could on his own. The suit also provides an energy shield that requires only a short period in cover to fully recharge. In technical terms, the Mark VI is totally legit.

Our officially licensed Master Chief Ultra Prestige Costume may not have Halo’s space aged technologies, but it is the best Mark VI Armor set on the market. With its black jumpsuit, helmet, gloves, and 30 individual armor pieces, this is the most faithful homage to Master Chief we have to offer.