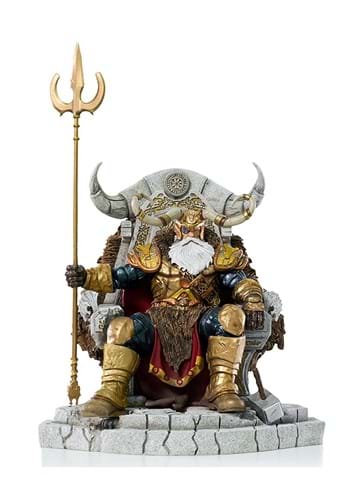 Will the Real Odin Please Stand Up?

These days, it's hard to trust your own eyes. He looks like Odin, but is he Odin? In Thor: Ragnarok, Loki was able to rule over Asgard for quite a while. All it took was a clever disguise and the entire kingdom of Asgard thought he was their king! They definitely should have known something was up when all of the theater acts become homages to Loki...

Anyways, it's got us wondering about something. Is this Marvel Odin Art Deluxe Statue actually Odin or is it a Loki statue that's cleverly disguised as the true king of Asgard? We can't tell, but it's definitely a collectible that belongs at the center of any Marvel collection.

Inspired by Odin from the Marvel Cinematic Universe, this statue is crafted out of polystone material and features intricate texturing to recreate the stoic character. The statue is hand-painted, giving it a realistic style. The 1/10 art scale is a great size that will fit right in with your other Marvel collectibles. Of course, it might be Loki in disguise, but when it looks so much like the real thing, you'll never be able to tell the difference!