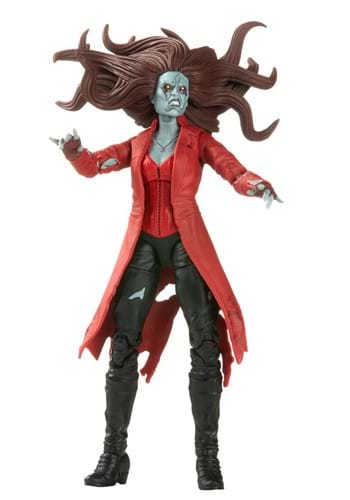 What if...? What if the Scarlet Witch's powers went haywire? So bad that she accidentally takes out Hawkeye with a crashing Quinjet and Vision by making his Ultron programming take over? That would be bananas. What if she used her reality-warping powers to erase the x-gene from the mutant population, reducing them from millions to a few hundred people? Yeah, that would be nuts--too bad all that happened in the comics. Poor Wanda.

Our Marvel Legends Series What If...? Zombie Scarlet Witch 6-Inch Action Figure shows a zombified version of Wanda Maximoff who can't control her powers. If you have seen the What If...? series, you know that she goes on a tear through the Multiverse.

This officially licensed Marvel action figure really puts the witch in Scarlet Witch. She looks terrifyingly awesome. If you are a fan of the mad hex-magic user, check out this Marvel Legends Series What If...? Zombie Scarlet Witch 6-Inch Action Figure.