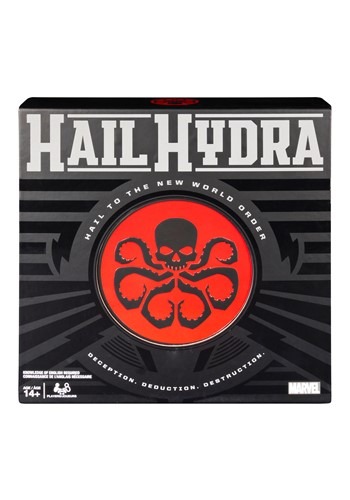 It seems that no matter how hard either side of the good vs. evil war tries, there are always a few more surprises that the other side can pull. That is always especially true in the Big Apple, New York City. There, a whole host of nefarious villains are always descending to cause havoc. But, citizens never need to fear. The heroes will be along in no time to help save the day! Then again, we've heard some pretty scary rumors about Hydra Agents sneaking into S.H.I.E.L.D...

Bring your whole heroic team together to secure salvation for the citizens of NYC in this officially licensed Marvel Hail Hydra game. This is a 45 minute game of deception and card-based battle that will have 5-8 players choosing their favorite Marvel characters and fighting against a series of notable villains. At the beginning, you'll draw tiles to determine if you're a Hero or a Hydra agent. While everyone is closing their eyes, Hydra agents reveal themselves to each other. Over several rounds, you'll play several 'Attack Cards' into a pool and tell the table how many good or bad cards you're playing. Heroes want to work together... but Hydra agents are working to undermine their success. If the cards line up right, you'll take down a villain. If you fail, the villain attacks NYC and brings the Hydra Agents closer to victory.

Everyone seems pretty interested in the fate of New York City, especially the scheming agents of Hydra. Will you be one of the heroes that helps defeat the villains and save NYC or will you be one of the hidden agents that say, "Hail Hydra!?" Find out in this Marvel deception game and play out your favorite hero's destiny.