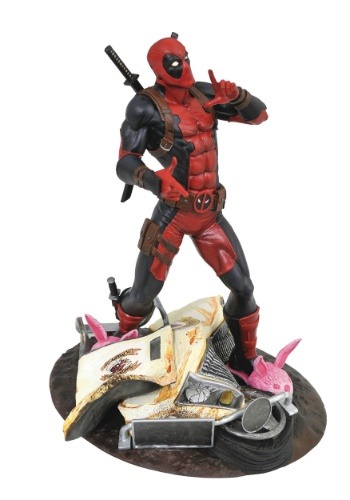 Deadpool has got to be one of our favorite heroes (or anti-heroes, rather). Like, don't tell the other heroes, but all of their hoity-toity goody-two-shoes demeanors were getting a little annoying. Like, can't a superhero have a bad day? Can't a superhero want tacos? That's what we love about Deadpool. He is unapologetically himself. Take this Taco Truck Deadpool PVC Statue, for instance. This 10-inch tall resin statue portrays Marvel's Deadpool with some slick finger guns, stomping over a crushed taco truck while in fashionable pink bunny slippers. It is, in a word, so very Deadpool. Which is why we love it. Forget the capes and super-powers. Give us the dude who wears slippers out of the house and laughs at his own jokes. That sounds much more our speed.