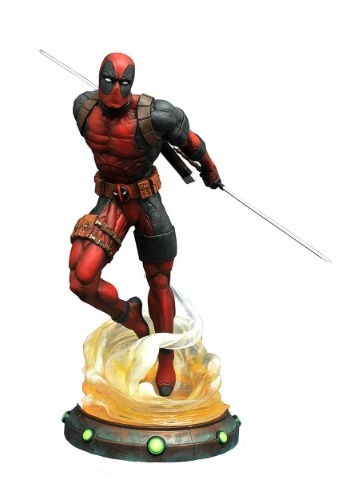 Can You Name All of Deadpool's Powers?

We all know most of Deadpool's powers and abilities. But do you know ALL of them? Yes, there's his mutant regeneration ability that's on par with Wolverine's. There's also his lightning-fast reflexes and his heightened agility. Of course, you know about his expert sword-fighting skills and his unbelievable accuracy with firearms. There's still one power you might not know about. Can you guess what it is? No, it's not his ability to break the fourth wall. Do you want us to tell you what it is?

Hypersonic farting. Yeah, we know. It's hard to believe isn't it? Deadpool has mastered the art of passing gas so loud, that it actually allows him the ability to leap large distances. Or, at least, that's what we think he's doing on this Marvel Gallery Deadpool PVC Figure.

This Deadpool figure is one highly detailed collectible! You can see the contour in each muscle with near perfect shape. Even his belts and satchels have shading and detail, to give him a gritty look. It's almost like this figure was lifted straight from the pages of a Marvel comic book. he comes with 2 katana swords that snap into his hands, but the final detail of this figure is the coup de grace. The figure stands on top of a golden swirl of air, which we have determined is proof of Deadpool's newest flatulence-based superpower.

We have been alerted to the fact that our original assumption was wrong. The small cloud circling this Deadpool figure is most likely not a fart. It's more likely that it's a detail added to give a dynamic effect to the collectible figure. (We still like to believe that he's capable of hypersonic farts though.)