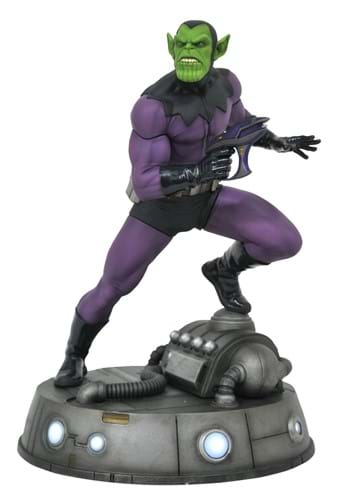 Skrulls are, by nature, a slippery species of alien. They have the most alien trait of all time, shapeshifting abilities. They can make themselves look like anybody or anything, and you would never be the wiser. The movie, Captain Marvel, was an honest interpretation of the race of beings. Our Marvel heroes have had many encounters with the Skrulls throughout the years. There was even a time when they secretly invaded Earth and placed themselves in positions of power. If you are a collector looking to add another sinister species to your vast collection, you must check out our Marvel Comic Gallery Super Skrull PVC Statue.

Even for non-collectors, it's hard not to love this officially licensed Super Skrull Statue. Did you know that the Super Skrull, Kl'rt, not only has all of his Skrull abilities but can also mimic the abilities of the Fantastic Four? He even has the power of hypnotism. Kind of random, but hypnotists were all of the rage back then. If you are a fan of the Kl'rt and want him as a Marvel Comics Statue, you have to pick up our Marvel Comic Gallery Super Skrull PVC Statue. The attention to detail is out of this world.