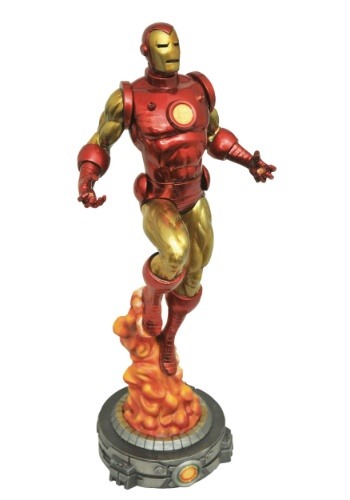 Any superhero is bound to be fairly recognizable.  After all their heroics and time in the spotlight, whether they want to be there or not, everyone is going to know their name.  That's especially true if they've recently halted an alien invasion!
It couldn't be truer than with the Iron Man, Tony Stark.  Here's a guy who really puts his head to the task and is so proud of his work to help humanity that he practically puts the name on the suit!  Or should he put Iron Man on the building?

Get a little recognition, yourself, by forming the Avengers.  Some might argue that you need the Cap, first, but we think that this Marvel Gallery Iron Man PVC Figure is the perfect start to your at-home Avengers.  This officially licensed figure is nearly a foot tall and features the classic Iron Man of Bob Layton's artwork taking off to flight.

TAKE OFF IN STYLE

There are many superheroes with the power of flight, though few of them really manage to do so with as much flare as Iron Man.  And, we're not just talking about the fact that he flies because of rocket flares.  The guy knows how to make everything look fantastic.  Prove it to yourself with this Iron Man PVC Figure today.