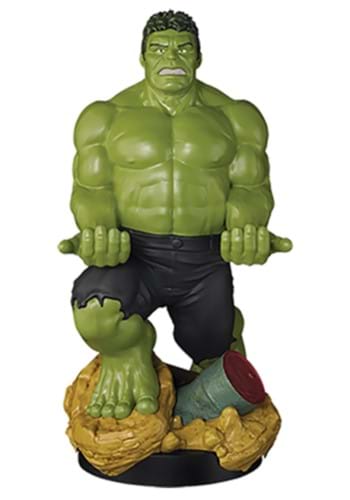 Hulk does a lot of smashing. We all know about that (the guy doesn't stop talking about it). But did you know that Hulk cares about a lot of other things too? He has other interests! No one ever asks him about his exceptional collection of acid jazz records. No one knows that he's quite the chef and cooks a mean paella.  And did you know that he loves a fully charged phone? Yep. It might be a weird thing to be obsessed about, but that's just one of this things. There's nothing that the Hulk loves more than a phone that has a full charge. He'll gladly sit around, holding his phone in his mighty hands, just to feel the satisfaction of knowing the phone will soon be fully charged! In fact, he'll even help you charge your phone!

This Marvel Avengers Endgame Hulk XL Cable Guy Phone Holder wants to help you charge up your phone! It's made out of molded resin and is shaped like the big green superhero. The figure has a pair of hands that can hold your phone, or other controllers. It features a USB charged cable that's 6 feet long. Just place your phone or controller in his mighty hands and he'll patiently hold it until you need it again.