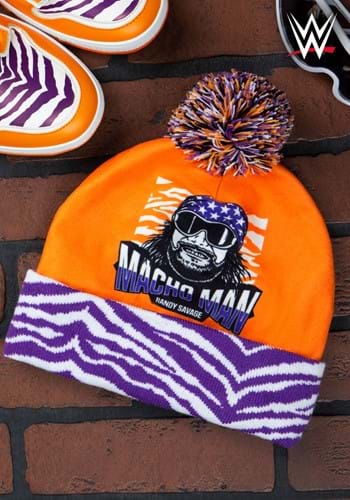 Macho Man Randy Savage is the one true king of the ring. He's too sweet to be sour and some even call him the Tower of Power! He doesn't get worried when cold weather comes to town. He faces off against the chilly weather like the champion that he is. Oh yeah! And here's a little secret. He doesn't want you to let the cold pin you down either! When you have this WWE knit hat on your head, chilly weather won't be able to stand a chance!

Now, you can be ready to go a few rounds with cold weather when you wear this WWE Macho Man Knit Hat! it's officially licensed and is inspired by one of Randy Savage's most iconic outfits from the ring. The hat is bright orange with a purple and white zebra-striped cuff. The front of the hat has an image of Macho Man himself printed on it. The top of the hat has a purple, orange, and white pompom. When winter rears its ugly head, just toss it on and you'll be ready to put chilly weather down for the count. it's the perfect hat for any fan of the Macho Man!