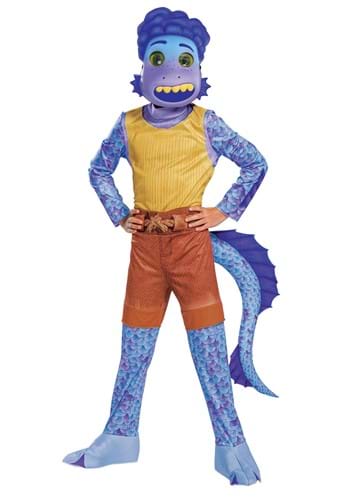 Alberto Scorfano is a self-proclaimed expert on all things human! Of course, he doesn't actually have as much experience as he might lead his friends to believe. He knows about all of the human delicacies, like gelato and pasta. He also knows the greatest mode of transportation known to mankind... the Vespa. It might seem like a simple scooter, but he knows that it's the best way to head out on a brand new adventure! He's definitely the kind of pal you want to hang out with when you're looking to explore the human world!

Now, your child can jump into the world of Disney's Luca by wearing this Alberto Costume! Sized for both kids and toddlers, this officially licensed costume is the easiest way to become Alberto.

This costume is a jumpsuit that's designed to look just like Alberto from the movie. The suit has blue scales printed all over the arms and legs to recreate the look of the character's skin. The suit also has an attached pair of shorts and a yellow tank top. The legs end in shoe covers. The tail has a fin on it and attaches to the back of the suit. The mask finishes off the costume and fits with an elastic band in back. The molded mask has Alberto's smiling face in the front and even comes with his big green eyes on top!

If your child was a fan of Luca, then this Alberto costume will let him dress up just like the Disney character. It's a great look for Halloween or playtime! Just be sure you check out our selection of Luca costumes, because your little one is going to need a best bud when he heads out on his next adventure.