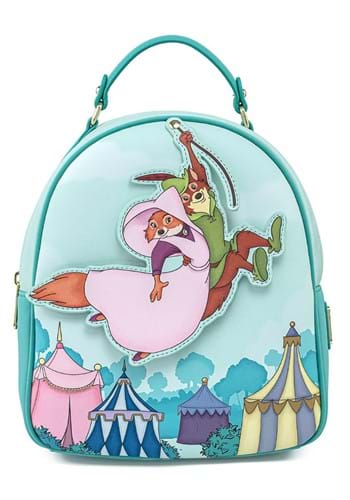 It was a simple touch, but oh so necessary! Turning Robin Hood and Maid Marian into foxes may have been the most brilliant move that Disney could have done. After all, Robin Hood is cunning, sneaky, and agile, just like a real-life fox. He sneaks into the archery contest right under the Sheriff of Nottingham's nose. He outsmarts Prince John without much difficulty. He and Marian even escape in style from the long arm of the law!

This lovely Loungefly bag captures the foxy couple during their scramble to safety. It's another one of Loungefly's delightful bags that are officially licensed from Disney!

This Disney Robin Hood Rescues Maid Marian Back brings you a stylish mini backpack with a beautiful design from the movie. The bag is constructed out of a vegan leather, made out of a quality polyurethane leather. The bag features a colorful image of Robin and Marian swinging over tents, just like in the movie. The interior compartment has enough space for a few of your daily essentials and it even comes with a handle on the top for carrying. It also has adjustable shoulder straps to allow for a comfortable fit. It's a cute bag for anyone who's sly like a fox!