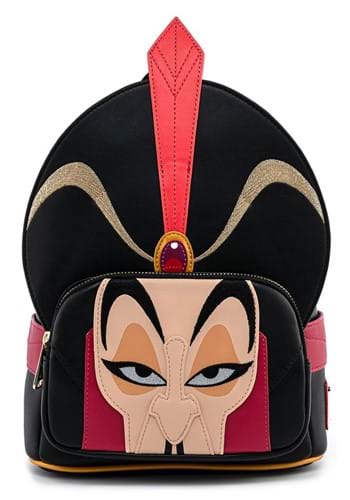 Jafar never gets his hands dirty. Had he just ventured into the cave and claimed the magic lamp with his own hands, he would be an all-powerful being with everything that he'd ever wanted. Instead, he just sent Aladdin. He got the lamp, he became friends with Genie, and he was the one to harness the power of wishes. Then, not learning from his previous mistake, he sent Iago to retrieve the lamp instead of doing it himself!

Well, now Jafar has finally learned his lesson. He's ready to carry the load himself this time! When you wear this Loungefly Aladdin Jafar Mini Cosplay Backpack, the evil vizier Jafar does the work for you!

This Loungefly backpack is officially licensed from the classic Disney film. It has a design inspired by Jafar and it even has his face incorporated on the small compartment in the back. It even has a pair of menacing eyes! The main compartment is just the right size for holding a few of your necessities, like your phone and wallet. The pack fits with a pair of straps. Just toss Jafar on your back and he'll help you carry your most valuable treasures himself!