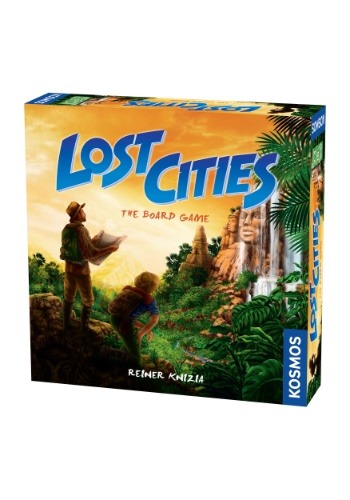 There's a pretty hefty risk and reward system that comes into play when you're trying to discover ancient places and make your name as a grand explorer. The big one is just not getting far (you know... assuming you'll get back).

Take on the role of a team of grand explorers as you play in the board game version of Lost Cities. In this 2-4 player game, you'll spend 30-60 minutes trying to race the others as far as you can to uncovering five mysterious locations in the jungle. Each player has four 'explorer' tokens, including their main explorer. On each turn, you can play a card or you can discard one to select a different one. Play cards in ascending order to move your explorers along the board, ever closer to crossing the bridges and discovering the location. Be careful what you play, because if your cards have too high a number, you might get stuck at the entrance and lose points instead of gaining them.

The round ends when four explorers have crossed bridges and then you add up your points based on how far each explorer got. Your lead explorer doubles the points (for good or for bad) and the tokens that you've acquired along the way might earn you mysterious artifacts, bonus points, or let you advance faster along the path. Play three rounds and see who is the grandest of explorers!

A QUICK JAUNT TO THE JUNGLE

An expedition into the wilds might usually take months or longer, but Lost Cities is a game that can be really quickly picked up by brand new players while still being quite the in-depth strategy even after several games!