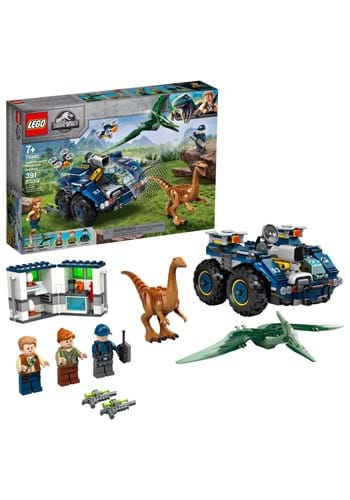 It happens in every Jurassic Park movie. Every single one. The big ol' T-Rex gets loose, causes a boatload of mayhem or the velociraptors go on a rampage, hunting unsuspecting humans. Maybe the folks who run the park should stop creating such dangerous dinosaurs. Instead, we could have a park full of nice dinosaurs who don't want to eat every human in sight! Well, this LEGO Jurassic Park Gallimimus and Pteradon Breakout Set features some of the more friendly dinosaurs at the park and is probably a lot less dangerous than the T-Rexes and velociraptors seen in some of the movies!

This officially licensed LEGO set brings you everything you need to assemble a research team and a few dinosaurs! The set comes with 391 pieces, including 3 mini-figures inspired by the Jurassic World movies. It also comes with the pieces to build a vehicle, a small lab, and plenty of dinosaur accessories for your team to investigate. It also comes with a friendly gallimimus and a pteranodon for Owen Grady and Claire Dearing to hang out with! If you or your child love dinosaurs, especially nice ones, then this is the perfect LEGO set for you!