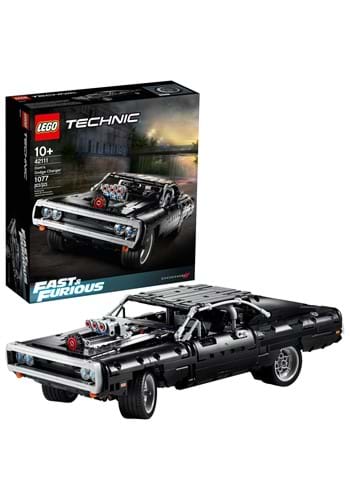 A Star is Born

Let's be real here. The real star of the Fast & Furious movies isn't Vin Diesel. It's the cars. As much as we like seeing Dom duke it out with his enemies and say witty one-liners, we really just want to see his Charger blazing through the streets as much as possible. Even with all of the movies that have hit the theaters... we can't help but feel a hunger for more Charger! The good news is that people at LEGO must love Dom's ride just as much as we do, because they came up with this LEGO Fast & Furious Dom's Dodge Charger Building Set. It comes with everything you need to build the legendary car.

This officially licensed LEGO set includes a whopping 1,077 pieces. When fully assembled, you get a 15-inch long version of Dom's signature vehicle from the movies. It has plenty of moving parts, including the hood, the trunk, the doors, engine pistons, and the steering wheel. Its realistic style makes it a great addition to any Fast & Furious collection. You can even pair the pieces up with your other LEGO bricks to make some brand new creations based on the movie!