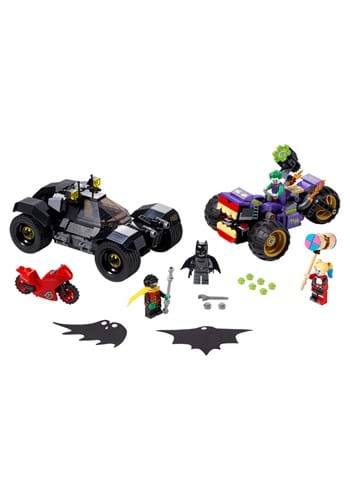 The Joker never learns. Batman has the Batmobile, the greatest superhero vehicle of all time. It's faster than a sports car, it's fully loaded with a variety of gadgets, and we bet it has a pretty amazing stereo system! How could a supervillain ever outrun that piece of work? Well, The Joker and Harley Quinn are going to try! He's got his hands on a brand new trike and he's ready for a joyride through Gotham City. Will Batman be able to stop him or will they get away in villainous style? You get to decide when you have this LEGO Batman Joker's Trike Chase Building Set!

This LEGO Batman set brings you a 440 piece set that will help you play out some Gotham City shenanigans. When fully assembled, you get the Batmobile and The Joker's brand new trike. It also comes with Robin's motorcycle, so he can help Batman chase down the villains. It comes with 4 mini-figures, which include Batman, Robin, The Joker, and Harley Quinn. It also comes with a variety of accessories. That means you get everything you need to have your own Batman adventure! It's intended for ages 7 and older... but it's totally a blast for adults!