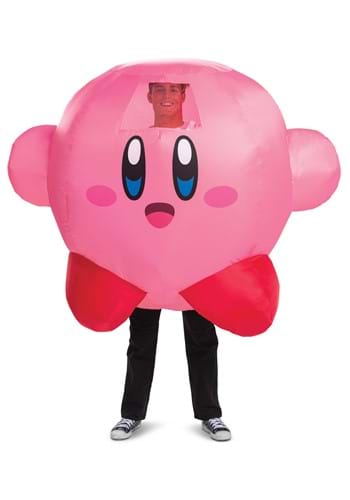 What would you do if you were Kirby? Sure, we would all spend some time floating around the city and racing in whatever kart we could find, but beyond that. Kirby gets its strength by sucking in enemies and honing their power. This manifests in some pretty cool ways you should consider taking advantage of. Kirby can become a big spike ball, a Looney-Tunes-esque anvil, a big 'ol mallet. So of course, the squishy-lookin' pink thing packs quite a punch in a pinch. We would munch on chicken wings and see if we sprouted wings -- you know, for flying -- or we would eat a computer and see if we became an android. ...Now that we have thought of it, don't tell Kirby about that idea. Kirby would simply be too powerful.

Marvel at this Adult Kirby Inflatable Costume. With the right details prepped, you could tell a pretty cool story about being eaten by Kirby at the next costume party. Snag some muted pants and shoes to let the rest of the costume really pop and you'll be set. A few words of advice, though. One: don't try eating a computer, especially if you are a guest at someone else's costume party. Two: don't try eating other people, because this costume is meant for only one human at a time. Three: erm, maybe size up the door frames before you plan your route to the snack table, lest you embarrass yourself trying to squeeze into a space that's not so Kirby friendly.

Questions & Answers
Q: Is the fan within the Kirby Inflatable costume constantly running to keep the costume inflated? And is there any video to hear the loudness of the fan?
Asked by Anonymous | April 16, 2022
Answer
Ask a Question
Reviews