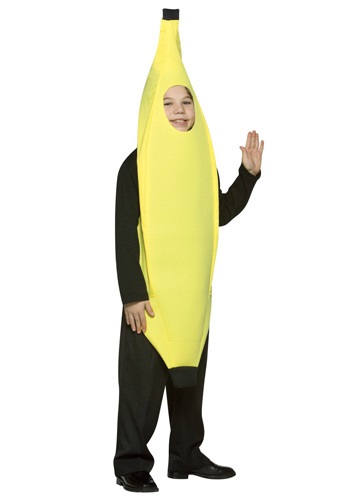 Bananas are not our favorite fruit. The taste is sweet but bland, and the texture is less than refreshing. Sure, we will eat banana's but we aren't going to get too excited about it. However, when it comes to banana costumes, THAT is something to get excited about! This costume is absolutely hilarious. It might not be a joke at all, but something about this costume breaches a whole new realm of ridiculous that we can't help but appreciate.

This costume is a little bit dangerous though, so listen carefully to our warning. When your little one is wearing this costume, people are going to think it's awesome and want to give them high fives. A LOT. In fact, if they end up in a crowded room, it is likely that every single individual will want a high five. This is too many high fives for one person to be giving out, and if they aren't careful, they could lose feeling in their hand from giving out too many high fives at once. Be careful.

This costume is simple, and all the better for it. It's simply a foam tunic made to look like a banana! It's bright yellow and has black ends, and has a hole for your face, torso, and arms. The only thing that this costume can't do is be peeled open! Well, you could we guess, but you'd be destroying the costume as you did it. So don't is what we are saying.

Not only are they at risk of losing the feeling in their hand, they are also at risk of being eaten by a monkey. If a monkey were to spot them in this incredibly deceiving costume, they would instantly attack and try to have your kiddo for lunch! So please, be careful when you have this costume. We just don't want anyone to get hurt!