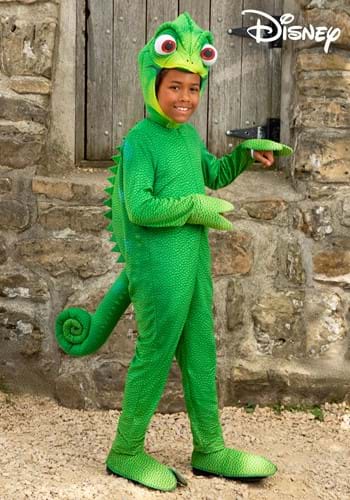 Growing up in a tower away from the rest of the world must have been a very lonely life for Rapunzel. Other than Mother Gothel, Pascal was Rapunzel’s only friend (and we’d say it’s a bit of a stretch to call Mother Gothel a “friend”). Although this little chameleon never speaks, we’re usually able to figure out what he’s trying to say. He can change color to indicate his different moods, and he’s able to express himself pretty clearly through different gestures and facial expressions. He’s a loyal friend to Rapunzel who encourages her to follow her dreams and isn’t afraid to stand up for her when he needs to, despite his small size.

This adorable chameleon from Disney’s Tangled shows us what true friendship is like. If your child wants to dress up as Rapunzel’s best friend, they might like this Kid’s Pascal Costume. His expressive eyes are placed perfectly on the headpiece, which stays on with a hook and loop fastener. The jumpsuit includes his curly tail and spiky back to give it that chameleon-like shape. The final pieces of the outfit are two-toed foot covers so that your child will be green from head to toe. They’re sure to have fun running around as this adorable chameleon, but just make sure they don’t try to eat any insects!