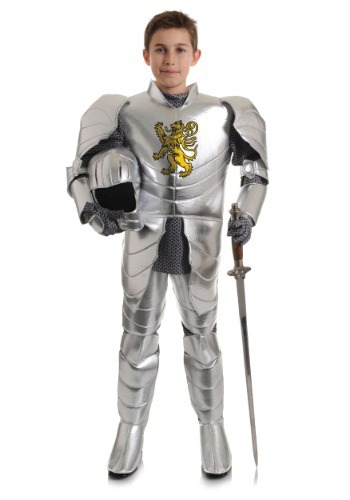 Your kiddo has been pretty helpful lately. He been polite, done his chores, engaged in some minor acts of heroism (who can forget him getting the neighbor’s cat down from the oak tree?), and has gained some independent wealth (relatively) from his summer lemonade stand. Heck, we even heard that the other day at school, he stood down the middle school bully who was intimidating some younger kids. You know, we think it’s time you gave him a plot of land, a castle, a title, and made him an official knight of the kingdom (aka your neighborhood). So pick him up this Child Knight Costume, grab an official looking sword, and start the ceremonies.

Seriously, he’s achieved a lot of good deeds in his young life so far. And we think he’s responsible enough to stake out his own tiny plot in the backyard, where he can boss the dog around and maybe plant some tomatoes. It’s every tiny knight’s dream.

There’s no way around it, this outfit is pretty amazing. It’s a perfect look for your brave little paladin. It’s comprised of a tunic, which fastens with Hook and Loop fastener in the back. This piece has chainmail-print fabric with attached armor pieces at the shoulder, chest (with an emblazoned gold Scottish lion), back, and forearms. He'll also get chainmail-print pants with attached foam pads at the thighs and knees that fasten with straps in the back. Gloves come, as well, in chainmail-printed fabric, while the foam shoe covers wrap his feet and a foam helmet with attached face shield keeps his noggin' safe from fire-breathing dragons or sword impact. It sounds complicated, but all good knight armor is.

A Feudal Kingdom, You’ll Have

Just a word to the wise, the whole feudalism thing failed because the King gave away too much power to the knights of the realm, and then they revolted, and royalty tried to take power back, yadda yadda yadda...eventually the Magna Carta created the idea of limited government. We doubt your kind kiddo will revolt and force you to agree to limit your authority over him, but maybe just keep an eye out for that. It's happened.