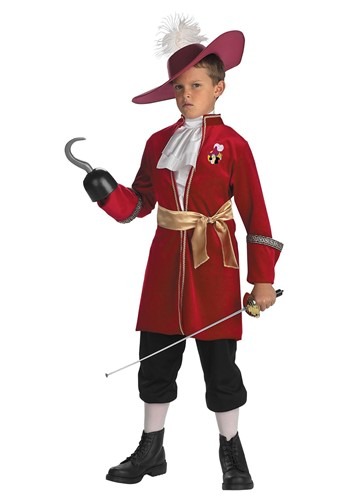 Did Anyone See a Crocodile?

Ahh, another day in paradise! How shall we pass the time on this gorgeous tropical island? Maybe we should make a few crew members walk the plank. Smee would be a good choice for that game - he dropped the ship's second-best spyglass. Perhaps we could lower the rowboats and chase the mermaids around their lagoon. No, we know what to do! We can try to kidnap the Lost Boys again and lure that irritating flying boy out of hiding so we can catch him and defeat him once and for all. That's the perfect - wait. Something just made a ticking noise. Everybody hide, the crocodile is back and he's hungry for some pirate captain casserole!

Dress up as the most feared being in Neverland when you wear this officially licensed Kids Captain Hook Costume! You'll look every inch the devilish pirate in a maroon crushed velvet jacket plundered from a merchant ship you scuttled before running aground on this enchanted isle. It's trimmed with brocade ribbon, tied with a golden sash, and has a printed image of Captain Hook on the left side of the chest. The white dickey shows your status as a gentleman pirate while the pants' elastic waistband keeps you comfortable during sword duels and overland chases.

Blast that Peter Pan! He's the one who sicced the crocodile on you - the one that swallowed your hand in one gulp. If you get your hands on him, you'll show him just how dastardly a pirate can be!