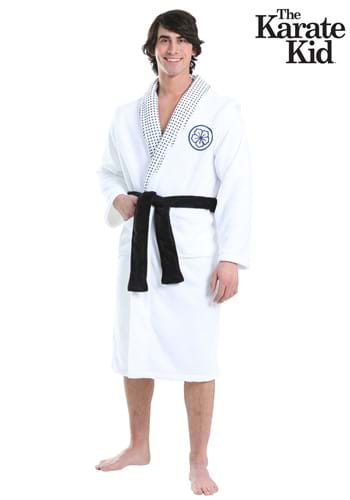 We’re here to let you in on a little known secret about your favorite film. Did you know that in addition to training for hours and learning how to wax a car, Daniel LaRusso had a hidden ritual practice in The Karate Kid? That ritual was bath time.

Don’t believe us? Soaking in a hot, bubbly tub loosened sore muscles and let Daniel meditate on moves and prepare for his tournament. There was actually a long bath montage in the original director’s cut of the film, but it got taken out in final edits. That is how important Daniel took his bathing. And what did he wear before and after his routine scrub and soak? Why, this Karate Kid Daniel San Robe, of course! It’s practical--it will feel really cozy as it wraps around you and ties with its belt--and pretty darn nifty, if we do say so ourselves. It has a Karate Kid accents that recall Daniel’s karate outfit from the film. So go ahead and enjoy a nice soak in the tub tonight; it’s what Daniel would do. Just maybe wait until you’re dressed to practice mastering the Crane.