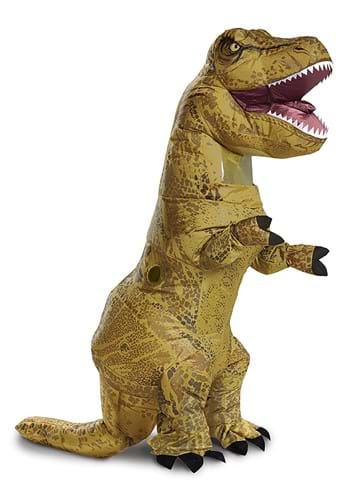 Tell everyone, "We have a T-Rex" at your next Jurassic World-themed party--then call in the kids! This inflatable T-Rex costume for kids is easy for them to get on and take off themselves. But once it's on, you'll never lose track of them! Between the extra-tall inflatable head, the long tail, and the "RAWR" noises they'll be making all night, there will be zero confusion about which kids are yours and where exactly they are.

This officially licensed inflatable costume is made of 100% polyester nylon fabric. It has a back zipper for easy on-and-off transitions (because we both know your kids will need to use the bathroom approximately 5 seconds after being zipped in.) Elastic at the wrists and ankles mean they'll only be walking on the feet part of the costume and only be picking things up with their T-Rex claws. A green transparent window in the dino's mouth helps them find their way. Being inflatable, this costume has an included fan that needs 4 AA batteries (which are not included.)

The T-Rex in Jurassic World is maybe the biggest hero of the movie. All kids love heroes, and all kids love dinosaurs, so this inflatable costume is a double threat! Without small accessories to lose and an extra-large costume to keep them visible and contained, your kids will be zooming around like little T-Rexes in no time. Zip them in, flip on the fan, and watch them dominate as the king of the dinosaurs.