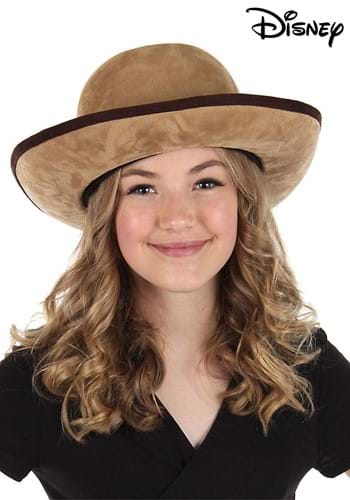 You've heard so many stories about the Tears of the Moon. First, you might have thought, 'Well, that's an awful name for a life-giving flower!' We would have to agree but, if it were called the Happy Panacea, everyone would be hunting for it! The next thought that crossed your mind was just how rare a treasure it was going to be. How would you store such a find? What kinds of sorcery might protect something so rare? And what are you going to do if a jungle bird tries to ruin your adventure with a birdie bowel movement? What!? (Trust us; those jungle treasures have whacky defenses.)

Keep your head safe and style secure when you head off on your grand adventure dressed to impress with this officially licensed Lily Hat from Disney's Jungle Cruise. This Breton-style hat is a true treasure thanks to its comfy rounded top and rich tan color. Rich contrast comes from the dark brown band and trim on the upturned brim. Keep the sun at bay, banish the birds, and even have a safe spot to store your magical flowers should you happen across any! Because, with this bit of Jungle Cruise couture, you'll know that the real treasure was the hat you found along the way!