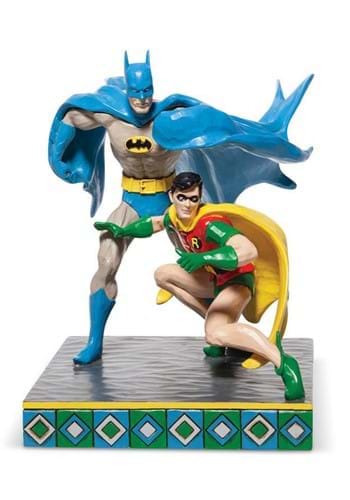 Amazing isn't it? Batman and Robin have been fighting crime together since 1940. Over 80s years later, both of them haven't aged a bit! You'd think that after a lifetime of chasing after villains like The Joker, they'd be slowing down, but that's just not what heroes do! This Jim Shore Batman and Robin Statue pays homage to the original dynamic duo by immortalizing them in old-school style.

This officially licensed statue is crafted out of molded resin. The base measures 6 inches by 6 inches and has a green, blue, and white diamond patterns around the edge. It has both Batman and Robin on top, both wearing their classic outfits from the 1940s. They're frozen in a dynamic pose and look ready to battle the evil forces of Gotham City! The Batman figure stands 8.5 inches tall, giving it a powerful presence in any collection!