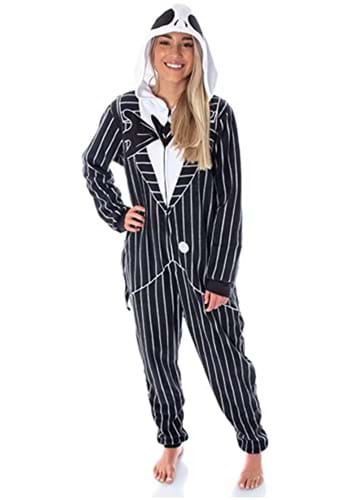 When you're feeling a little bit jaded about spending your next three hundred and sixty-four days planning another Halloween...again...it's natural to think about trying your hand at taking over another holiday. Emphasis on takeover, because all it's going to take is sending Lock, Shock, and Barrel to kidnap Sandy Claws and to get all of your monsters making very dangerous (or very disgusting) holiday presents. What could go wrong?

If you're singing, "What's this?" in amazement, let us set you straight: it's an officially licensed Jack Skellington The Nightmare Before Christmas Union Suit! The black polyester sherpa union suit zips up the center front and is printed with thin white pinstripes. The wrists and ankles are sewn with cuffs made of cozy black rib knit. The top is printed with bat bowtie and suit details, and a pocket is sewn into each side seam. The attached white hood is printed with Jack's eye and nose sockets.

Whether you're attending a costume party in October or kicking back on the couch in December, you're going to need something cozy and awesome to wear. Take inspiration from the Pumpkin King, who always looks awesome even when he's in the middle of an existential crisis of epic proportions. As long as you've got your friends by your side, everything's going to turn out amazingly. (You can apologize to Sandy Claws later, but you'd better prepare to be on the Naughty List for a little while).