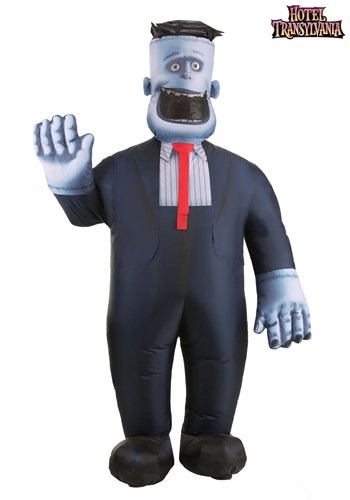 We never really understood why the conventional Frankenstein's monster was soo freaked out by a little bit of fire. Didn't the monster know that lightning is what brought it to life in the first place? That's pretty much just fire! You can ask any of the other magical creatures that dwell within the monster's realm and they'll tell you that where you see lightning striking, there's bound to be some fires as well!

Uncle Frank is a bit of a different guy, though. Fire doesn't bother him nearly as much as... trains? Plus, he's a lot more level-headed than his flat-topped counterpart. He's even been known to tell a good joke now and then. Give him a spot on stage for a comedy tour and we can guarantee that he'd light up the audience like nobody else!

No need to put a fire under yourself just to transform into the epic monster of Hotel Transylvania. Our Made by Us design team leaped into the lab to bring you this officially licensed Uncle Frank costume! The air-tight jumpsuit is fully decorated from head to toe, including the blue hue of Frank's flesh to the club-like feet he tromps around on. Big hands and a rectangle head all inflate with the help of a fan and battery pack and elastic at the cuffs keep you looking in character the whole night. Give a shout (and a look at the outside world) through Frank's wide smile and you're ready to help the rest of Hotel Transylvania's staff enjoy their haunted night.

A Breath of Fresh Air

You wouldn't normally expect an animated creature like Frankenstein to have great breath but it turns out that Frank's time at Hotel Transylvania has really turned him into a new monster! Join in on the fun with this officially licensed inflatable Frank costume and you're going to be light on your feet.