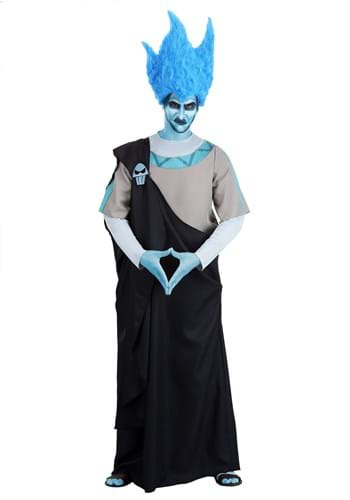 More Souls than You can shake the Styx At

There's a lot going on in the underworld. More souls are crossing the River Styx every day. There are plots to plan. Minions to command. And if you could just get The Fates to listen to what you have to say without interrupting what you have to say with a, "we know" than perhaps you could keep your cool. Still, Hades is the man for the job. He's got plenty of charm for a guy who hangs around the dead all day. Very little gets past him. He found out about Hercules when the chump was a simple sunspot. And if his minions had learned a little competency, perhaps he'd be the ruling leader as we speak. But no, his minions failed him, as minions often do. And while he's still simply ruling the underworld instead of sitting in a place of honor on Mount Olympus, we can't help but think that this immortal fella has still got a lot to offer! Pomegranate seeds, anyone?

Fire yourself up for Halloween when you throw on this flaming Hades costume! This Disney licensed look includes a simple tunic that fits over your head. The blue color under black drapery with skull detail is sure to make you look like you stepped right out of everyone's favorite Grecian cartoon. A fiery blue wig tops off the look, making you instantly recognizable as the scintillating, incendiary ruler of the underworld.

All the characters from Hercules are so much fun, we can't help but wish we could see them together again. Grant Disney fans the wish they never knew they had when you pair up with friends to go as Meg, Hercules, and Hades for a group costume. Memories of this Halloween are sure to be immortal!