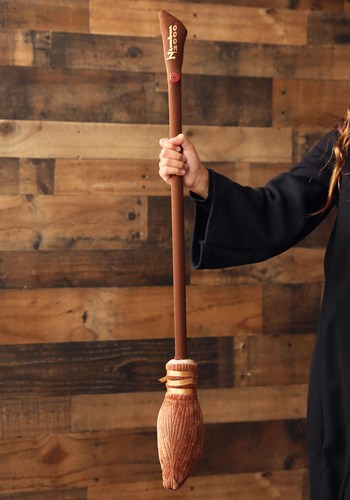 The Fast and the Bristly: Hogwarts Scoot

Do you desperately want to use your broom for more than just sweeping up dust bunnies? Have you been scooting around the house on your parents' dust broom, like some kind of silly muggle who just heard about Quidditch? Don't worry, we're not going to judge you. (We take our broom out for a scoot around the office on a daily basis.) Well, if you're looking to upgrade, then it might be time to put that kitchen broom down and get yourself a bona fide broom from the Harry Potter series!

This Nimbus 2000 Broom is officially licensed and is designed to look like the one used by Harry Potter during his days as the Seeker. We have to admit that despite looking quite like the one from the movies, this one won’t help you float around in the sky and it won't turn you into a speed demon on the field. It does, however, make you feel much more like a real wizard from Hogwarts... when you inevitably use it to scoot around on the kitchen floor. It also looks great in your collection when you’re not using it to cosplay as Harry!