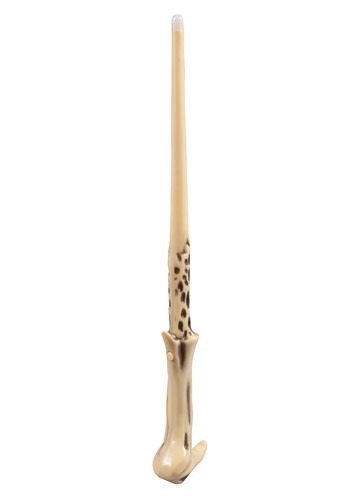 Does the Wand Make the Wizard?

What is a wizard without a wand? Well, they may as well be a muggle. We all know how Lord Voldemort felt about muggles. So he always kept a hand, or at least an eye, on his wand. Naturally, his wand was a truly exceptional piece of work. Crafted of yew and affixed with a phoenix feather core, you can’t really ask for a more pristine wizardry tool. It may not be one of a kind but it is still an extremely rare wand to behold.

Feel the magic in your bones when you wield Lord Voldemort’s prized wand. As seen in the popular Harry Potter movies, this replica wand also has a rather boney look to it. The end of this wand's handle has a devious hook that adds to the overall evil appearance of it. With one look at your new wand, everyone will believe that you can cast curses of unimaginable power.

Don’t Fall to the Dark Arts

While a wand itself is neither good nor evil, this wand has basically been deemed a tool of dark magic. Tom Riddle a.k.a. Lord Voldemort was not too shy about using the Unforgivable Curses. So just remember, you control the wand it doesn’t control you.