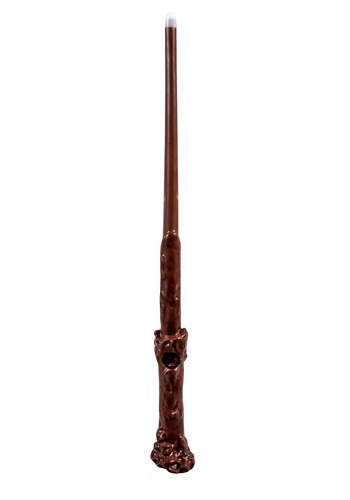 Magic for the Muggles

We've tried. We really have. We've waggled, we've flicked, we've even tried flailing wildly in the air. No matter how much we move around our wand, we really can't cast a single spell! We just had to come to grips with the fact that we're muggles and we don't have a single magical bone in our body. That doesn't mean that we've given up though! We've just gotten a little more creative...

Sure, this Harry Potter Deluxe Light Up Wand won't increase your magical prowess and it won't allow you to do real magic. It does, however, light-up. When you wiggle this wand around, it'll be a sight to behold... even if you won't be any closer to an acceptance letter from Hogwarts!

This Harry Potter Deluxe Wand is officially licensed from the movies and features a mold that captures the look and style of Harry's wand. The tip of the wand lights up when you use it, so when you wave it around it'll look like you're casting a magnificent spell, even if you have zero talent in the magic arts. Yep. That means even if you're a full-blown muggle, you can have a ton of fun feeling like a real wizard with this thing!