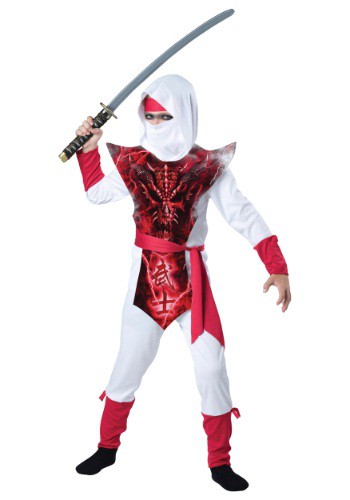 Your little guy is stuck. He wants to be the scariest thing there is for the upcoming costume day at school, but he can’t decide which is scarier: a ghost, or a ninja. Both are pretty terrifying, he says, thinking that most people are scared of ghosts, but only because ninjas don’t haunt you first, they just strike without warning. Well, we have a good solution for him! Why not just combine the two into one unmatched warrior and sport this Boy's Ghost Ninja Costume to truly corner the scary character market?

We think it’s a great idea (obviously, we suggested it)! Nobody expects a ninja that’s also a ghost, and therefore he’ll have the edge over everyone else, especially when trying to give a good fright! And then, when all is said and done, he’ll have an easier time fading away into the night, disappearing like a ghost in unexpected ways!

This devious costume is designed to combine the most fearsome aspects of both ghosts and ninjas. The hooded tunic features red sleeve cuffs and matches the pants with red leg cuffs. A foam-backed tabard has a printed dragon graphic on the front. Also included is a red fabric sash that can be tied as desired to anchor the tabard to the body. Finally, the fabric face mask conceals your little guy’s secret identity just in case any of enemies have designs of seeking vengeance!

Not that he’ll have any enemies that escape his grasp to begin with! Honestly, who can escape a ghost ninja? Certainly not any of his friends at the school’s costume day. And not us (believe us, we've tried)! In this outfit, he’ll far outshine anyone else, and be exactly what he wanted: the most fearsome costume character out there.