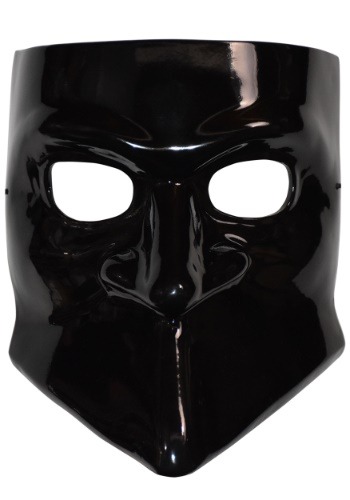 There aren't many places that people who even brush against fame are able to go where their faces aren't immediately recognized.  Then there is the whole swarming of fans and signing of autographs and, before you know it, the whole day is gone in a puff of smoke.

Well, that famous band, Ghost, has a brilliant way to dodge that kind of issue.  Masks!  The identities of the Nameless Ghouls, the guitar, bass, drum, keyboard, and backing vocals of the group, are completely unknown.  They can't even get into their own performances if they forget their backstage passes!

Experience the fame and anonymity of the members of the dark heavy metal band with this Original Nameless Ghoul Mask.  The molded mask is a dark and shining black, leaving breathing and sight holes, but offering those who see you no other opportunity to identify you.  With this kind of mask, you could walk right onto the stage and folks might even think you belong there!

WHICH IS THE REAL IDENTITY!?

It can be a little crazy to think that a mask that conceals your identity is the only way that people might know who you are!  Such is the struggle of the Nameless Ghouls in the Swedish metal band, Ghost.  When you have this mask on, you'll have just as much authority to join the group as the real members!  Hopefully, you can play an instrument...