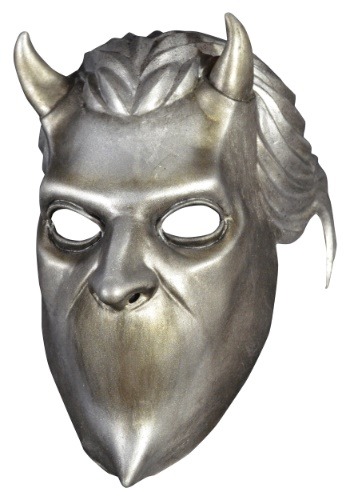 Do you love Swedish rock so much that it infiltrates all your dreams and turns them into heavy metal nightmares you really enjoy? If so, the band Ghost has probably been on your radar for a while now. Comprised of the lead singer, Tobias Forge, and five other band members only known as the 'Nameless Ghouls,' the band always brings high-octane energy and some supernatural mystique to all their shows. Disguised as a demonic anti-pope, Forge wears skeleton makeup, colored contacts, and a priest robe with a miter while the other bandmate's faces stay hidden by a ghoul mask like this one here. No one knows who the Nameless Ghouls are so you might as well be one, right? Wear the latex mask and stir up some drama this Halloween because nothing is more hardcore than a little bit of controversy,

The BC latex Nameless Ghoul mask depicts the distinctive devilish look portrayed by the unknown bandmembers who make up Ghost. The meticulously painted mask features eye and nose holes for your safety and since it's crafted from lightweight latex it's extremely comfortable to wear which is good since you shouldn't take it off and reveal your identity— that wouldn't be very metal.

Team up with friends to form a group costume modeled after the band. Other metal fans will appreciate it!