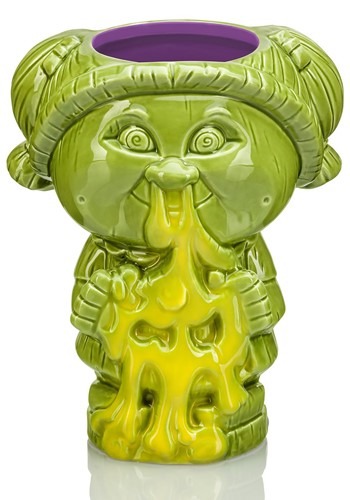 Ordinarily, a nose overflowing with snot would not be a great feature. It makes singing a little disgusting. It makes going to the prom a little moist, to say the least. But when you’re a nostalgic drinking mug, it’s a fantastic bonus! Everyone will laugh and think fondly of the Garbage Pail Kids, but we doubt that anyone will want to steal your beverage. The glowing gunk is kind of a turnoff – in the best possible way!

You’ll hear laughter and maybe a few shouts of “ewww!” when you drink from your very own Geeki Tiki Leaky Lindsay Mug! This officially licensed cup is a ceramic image of one of the Garbage Pail Kids’ most popular characters. Lindsay is colored green down to her perky ponytails, and the goo flowing from her nose is bright chartreuse. It’s also dishwasher and microwave safe, and not to worry – your house will never smell of microwaved booger!