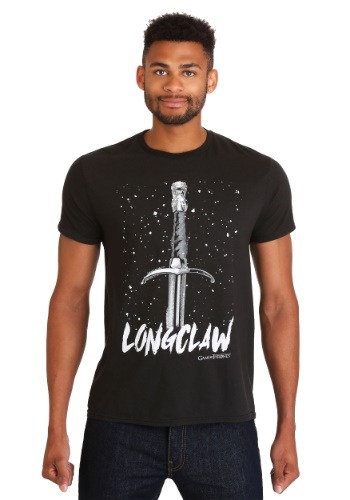 Jon Snow has seen some things. Unspeakable things, really. Let’s see, he’s witness vicious attacks by wildlings on his Night Watch brethren. He’s been forced into deadly battle with the frozen abominations known as White Walkers. He marched into battle against Bolton Ramsay in the Battle of the Bastards, and was able to secure a narrow victory for him and his family. And, of course, at his side the entire way, was the Mormont family sword, Longclaw.

Yes, Longclaw is one impressive blade in the Game of Thrones lore and now you can pay homage to the amazing blade by wearing this Longclaw t-shirt for men.

The licensed Game of Thrones shirt is a classic crew neck style made out of cotton fibers. The front is adorned with the printed image of Jon Snow’s trusty blade, surrounded by falling snow and the name “Longclaw” below. It’s a must-have for any fan!

Just put this Game of Thrones shirt on and you might just feel confident enough to duel a White Walker yourself… though we still advise against it. Unless you’re packing some actual Valyrian steel, you probably won’t fare too well against one of those monsters!