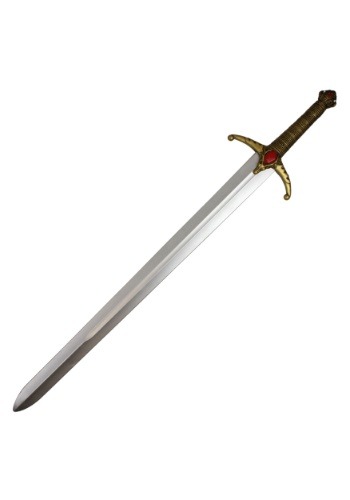 Let’s talk Game of Thrones for a moment. King Joffrey was the worst. Literally. If there is any human being that is completely unworthy of ruling the Seven Kingdoms, it’s him. He ordered the execution of Ned Stark after he made Sansa believe that he would spare him. Someone threw a cow turd at him and he ordered the execution of peasants to “teach them a lesson”. He ordered the deaths of any child that shared the blood of his father, Robert Baratheon. He ordered his guards to attack Sansa and he ran during the decisive battle to retain control of the Red Keep. He didn’t deserve the Iron Throne and he definitely didn’t deserve to have his own Valyrian Steel-forged sword.

Unfortunately, he was given one and he proceeded to give it the most depressing name possible, the Widow’s Wail. It deserves a more worthy owner, which is where you come in!

This Game of Thrones Widow’s Wail is a highly detailed replica version of the sword. It is made out of soft, yet durable foam, so it won’t exactly be slaying any White Walkers, but it makes for the perfect display piece to add to your collection. You can also use it for your Game of Thrones cosplay, whether you’re heading out as the nefarious Joffrey, or you plan on playing the role of Jaime Lannister.