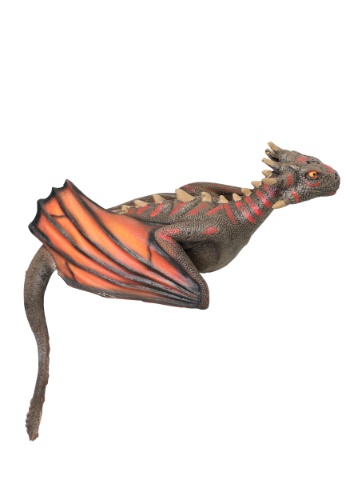 You've enlisted a few animals to protect your household. You started out thoroughly in the box and got a dog. It was nice to have around, still is. But when it came to warding off intruders your dog isn't cut out for the job unless begging for belly rubs counts as warding off intruders. Then you began thinking outside of the box for personal animal protection.

That dangerous looking hawk seemed like a good idea when you first saw that show about Mongol warriors but it turns out you don't have those Mongol warrior skills. You didn't even have a chance to name you falcon you simply shrieked as it clawed your shoulder and watched as it flew to freedom. That didn't make you feel very secure.

Can we give you a little advice? Get a fake dragon! You'll look like a tough dragon wrangler from far away so that your enemies won't dare mess with you. . . as long as they're far away. This dragon looks just like Dracarys, Khaleesi's treasured ward. This dragon has fiery undertones with a spiky spine and a long tail. It straps under your arm to stay secure all night for whatever action might happen so watch out bullies!