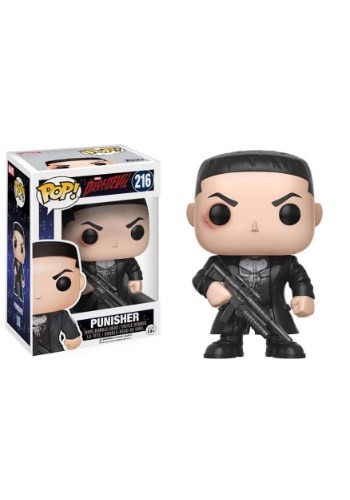 Frank Castle has led a pretty tough life. He went from military elite, being used by the government to a grief-stricken father to a violent vigilante ready to use brutal force against criminals. He also exchanged blows with Daredevil and had the displeasure of spending some time with the Kingpin. If there’s any guy in the Marvel universe that could use a break, it’s him. Maybe you can let him chill at your place for a bit?

This POP Punisher vinyl figure lets you give Frank the much deserved break! This little Funko figure is based on his appearance in the Daredevil Netflix series and he’s even wearing his skull-painted flak-jacket. He’s holding a big old assault rifle (old habits die hard), but he’s ready to stand next to your computer as you play some video games or as you get up to date on your social media! It’s much better than get shot at by dangerous super villains!