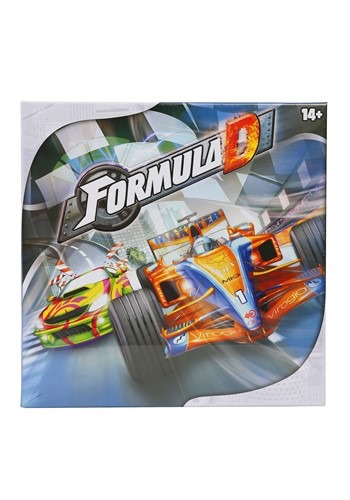 Rushing is the Rule

For years, we've been told not to run around in the house. Slow down in the halls! And, for heaven's sake, keep it down! (It's almost like our folks didn't try to get us to walk and talk for the first few years or something.)

But, things are different, now. It is time to throw all of those rules out of the window when you take to the tracks. There, the only thing Mom will be yelling is that she's coming up from behind to take the win away from you.

It's time to push it into fifth gear and take the inside track to claim the trophy with Formula D. In this 2-10 player game, you'll simulate racing in a hot rod and trying to be the first to cross the finish line... (hopefully without busting up your rig)! Each player gets a car as well as a frame, dashboard, peg, and a shifting gear to represent your place on the track, the speed your traveling, and the structural stability of your racecar. You'll begin in first gear and everyone rolls a die to determine starting position. Decide as you play if you want to shift up so you can roll dice with bigger numbers and cover more ground or if you'll downshift to avoid taking damage or disqualifying yourself on those dangerous turns. In the basic game, the first player who crosses the finish line in a still-running car wins. But, there are a ton of modified rules you can play with that include rainy tracks, multiple laps, nitro acceleration, and drifting rules, too!

Every game is madness in Formula D, so be ready to be as loud as you want when you're winning. Just make sure you don't ruin your car when speeding through those turns or it'll be right back to no racing down the hall for you!