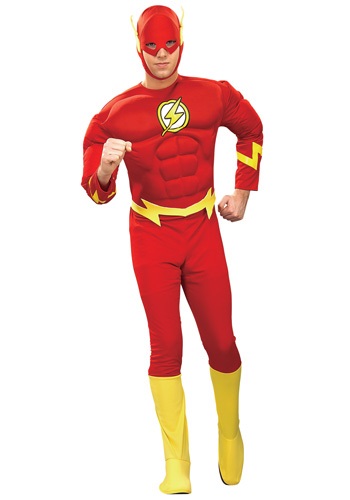 DC heroes usually have a few tricks up their sleeves. In addition to flight and super strength, Superman has his ice breath, his heat vision, and a whole host of other gifts. Batman has a wide collection of creative gadgets, from his signature batarangs to his souped up Batmobile. Even Wonder Woman, who’s strong enough to throw an ocean liner into orbit, doesn’t go into battle without her Lasso of Truth. But some heroes do just one thing and do it well. Take the Flash. He doesn’t have toys or secondary powers or gimmicks -- he just has pure, raw speed, and that’s all he needs to utterly screw up the bad guys’ plans.

But all that speed doesn’t just mean running really, really, really fast. Sure, he’s quick enough to evacuate the entire city of Tokyo (population: 9 million) in a matter of only 30 seconds, but he can also learn anything in a mere instant, able to read an entire library in a matter of seconds. Pretty handy for finals week! He can create a slipstream powerful enough to carry an entire tank, too. He’s even the fastest healer in the whole Justice League, able to get back on his feet after even their most powerful enemies’ attacks. The Speed Force is a powerful tool, friends.

If you’re quick too, you’ll see right away that Flash is one of the best heroes out there. With our officially licensed Deluxe Flash Costume, you’ll have everything you need to borrow the red blur’s classic look. Don’t wear this while you’re driving, though, because that’s a guaranteed speeding ticket. This costume really gets to your head!