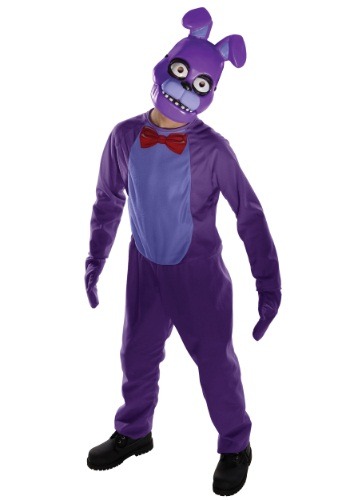 Have you ever found the lifeless animatronics performing on-stage at a Chuck E. Cheese or ShowBiz Pizza strangely terrifying? Now just imagine you’re the night guard at one of these entertainment eateries––and the mascots are on the prowl for humans. That’s the basic premise of Five Nights at Freddy’s and its sequels. If your child just can’t get enough of the horror-filled pizzerias of the Five Nights at Freddy’s video game series, this Five Nights at Freddy’s Child Bonnie Costume will be the perfect gift.

Your child will have endless hours of fun creeping around your house past their bedtime in this costume. Are they watching you from the hall? Maybe you’ll just shut the door to your office. That’ll make you feel safer. But eventually you have to go downstairs to let the dog out. You give the kitchen a quick sweep with your flashlight before entering, but you didn’t see those purple ears lurking in the shadows. Bonnie the rabbit jumps out! Game over.

Is it weird and a little meta that you’re getting your child a furry mascot costume from a franchise about murdered children being stuffed into furry mascot costumes? Sure. But this costume doesn’t have spring-locked animatronic parts that will kill its wearer if they breathe or make any sudden movements. We promise. That might seem like a weird thing to guarantee about a costume, so let us be totally clear that none of our costumes do that––just the ones in the Five Nights at Freddy’s games. It also isn’t haunted or animated by the vengeful ghosts of any previous wearers. We think.