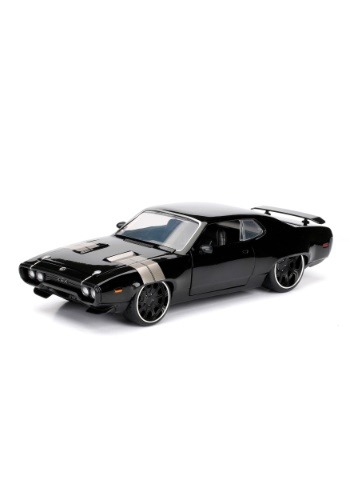 Dom is not one to mess around when it comes to cars. This man lives and breathes cars. Heck, we wouldn't be surprised if he said he was raised by cars. Maybe that would explain his ability to innately understand and drive vehicles like they were extensions of himself. Take for instance his '72 Plymouth GTX. Big. Bad. Burly. Just like Dom. It's no wonder he handles this care so well. As a matter of fact, we loved watching Dom drive this car so much we decided to get one of our own. No, not a real one. (Who could afford that?) Instead, we have this Fast & the Furious 1:24 Scale model of Dom's '72 Plymouth GTX. Made from die-cast metal and plastic, this car's doors, hood, and trunk open and it measures just over 8-inches long. A perfect miniature of Dom's sweet ride, no? It's almost as good as the real thing... almost.