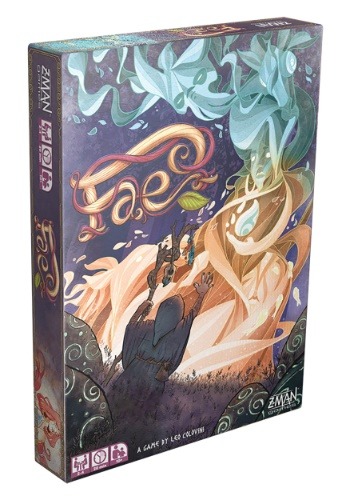 Lowly humans beware because the wayward spirits of this land are in competition! Things in the mortal realm might get a little strange. Maybe the will-o-the-wisps are getting more aggressive and luring more folks onto unstable ground more than usual. Or perhaps strange noises have been coming from the ruins of the green, rolling hills. Everyone knows to be wary of the deep, dark valleys when they're traveling through the twisting trails of the purple mountains. And honestly, we wouldn't whistle in the forests for fear something strange might whistle back. The best way to calm this world down? Play the game of the Fae! In this game, each color of wayward spirit will compete for the druid figures on this board with strategy, bluffs, and deduction.

This game challenges you to gather and isolate druids in order to serve your secret color identity. Originally released as the game "Clans" this newly designed board allows two to four players to compete for about twenty minutes. The game comes with sixty colorful druid figures, five plastic markers, a beautifully illustrated board, twelve ritual cards, and five spirit cards. The well-organized rulebook will help players ten-years-old and over jump into the game in minutes. With magic and mischief, folks are sure to want to play this intricate game again and again!