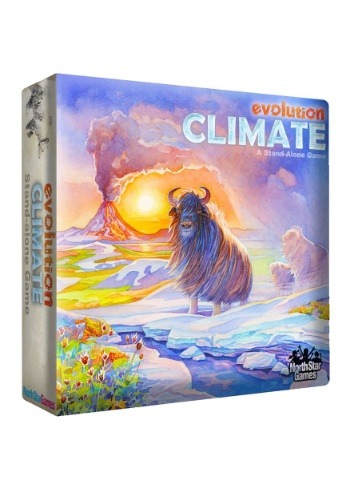 They say that it is a dog-eat-dog kind of world, but it used to be quite a bit more intense! Hop back to the Ice Age and beyond when you see just how tough the weather can be on a species that is just trying to make it to see tomorrow... and get a decent meal along the way.

Evolution: Climate is an expanded and stand-alone version of the Evolution game printed previously. In this 2-6 player game, individuals will compete with each other for 45-60 minutes to prove that they can survive the changing temperature of the world! Players begin the game with a species card and a token to represent a (1) population and (1) size. Each round, players receive 4 cards plus one for each species of creature they control. Cards feature adorable artwork of various kinds of creature traits, climate change icons, and point values. Play one card to the center to impact the changing weather. Then, you can discard a card to either increase the size or population of one species, gain another species card, or you can play it face down to give a species a special trait. Make it a carnivore so it can munch on other players or give it burrowing so it can hide from the cold! As the weather shifts, big creatures get uncomfortable in the heat and small creatures find cold weather troubling. Food grows plentiful or scarce. Make sure you can feed your whole population or you risk dying off! At the end of each round, gather up your food and face the next weather cycle. When all cards have been played, the game ends and the player with the best-fed species gets the win!

The first version of Evolution allowed you to watch creatures grow and face each other for food dominance. The update tests to see if you can handle the heat and if you're cool enough to dodge the coming storms!