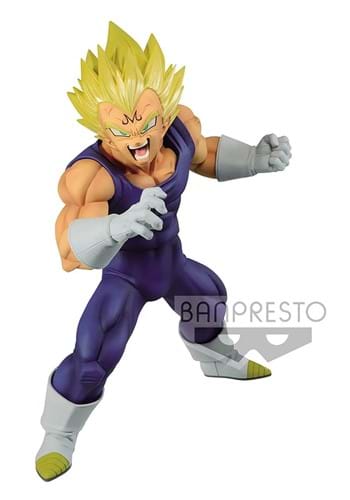 Vegeta has grown a lot since his debut in Dragon Ball Z. When we first met him, he was willing to do anything for his quest for power. He even fought a little kid (Gohan is a beast, but still)! He has always had a chip on his shoulder since Freeza absconded his right to the Saiyan Royal Throne and blew up his home planet (you would be a bit peeved, too). If you are a fan of the Prince of Saiyans, then cease your training and check out this Dragon Ball Z Super Saiyan Majin Vegeta II Maximatic Statue.

Vegeta always struggled to turn into Super Saiyan II. To achieve this goal, he allowed Bobity to use his body. Vegeta usually would want to fight without assistance, but at this point in the story, Goku was gaining exponentially more power, and Vegeta felt he was being left behind. Remind Vegeta he is the man and pick up this Dragon Ball Z Super Saiyan Majin Vegeta II Maximatic Statue.