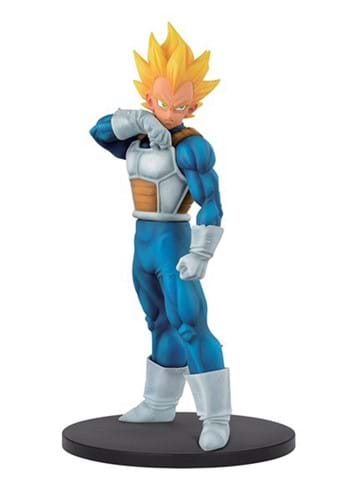 If you plan on fighting Vegeta, then you'd better bring it. He's not one to back down from a fight. Even after taking a beating, he'll get up shake it off, and start throwing fists. During the run of Dragon Ball Z, we've seen him come back stronger each time he's gotten knocked down. Goku, Racoome, Frieza, Android 18, Cell, Buu, and even Beerus, the God of Destruction, have made the mistake of thinking they had Vegeta on the ropes, but you can't break a Saiyan's pride, no matter how many times you try!

This Dragon Ball Z Vol. 2 Resolution of Soldiers Statue captures Vegeta's unshakeable resolve in an amazing collectible. The statue is constructed out of PVC material and stands around 6 inches tall. The statue has intricate detailing and captures each muscle and each wrinkle perfectly. Vegeta is depicted wearing his upgraded armor, as seen in the Cell Saga and he's even gone full Super Saiyan in this statue, complete with spiky gold hair. He's locked in an intimidating stance, as if he's wiping off blood from his face and getting ready to go a second round! It's a must-have for any fan of the Akira Toriyama series.